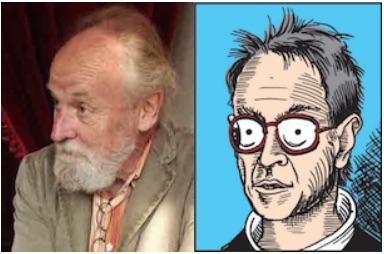 In 1969, activist and history grad student Paul Buhle published a special graphic issue of his SDS journal, Radical America. He enlisted Austin-based cartoonist of Fabulous Furry Freak Brothers fame, Gilbert Shelton, to edit what would be the first merger of New Left politics with the burgeoning counterculture and underground comix movements.
Paul Buhle and Gilbert Shelton are Thorne Dreyer's guests on Rag Radio.
Now, in 2018, Radical America Komiks has been reissued with a new introduction by Buhle and foreword by Jay Kinney. Paul, a prominent historian of the Left and popular culture critic, now publishes graphic novels and radical comics. Shelton, whose Fabulous Furry Freak Brothers -- characterized by Buhle as "totemic" figures in the counterculture -- first appeared in Austin's The Rag, also created Wonder Wart-Hog, Fat Freddie's Cat, and Feds 'N' Heads. Shelton and Robert Crumb are generally considered the preeminent artists of the comix movement. Gilbert joins us from Paris, France, where he now lives.
Images above: Gilbert Shelton, left, and Paul Buhle.
Rag Radio is produced in the studios of KOOP 91.7-FM, an all-volunteer, cooperatively-run, solar powered community radio station in Austin, Texas, in association with The Rag Blog and the New Journalism Project, a Texas 501(c)(3) nonprofit. It is streamed live on the Internet at KOOP.org and Radio Free America. The host and producer of Rag Radio, Thorne Dreyer, is a prominent Austin-based activist and writer who was a pioneer of the ’60s underground press movement. The show’s engineer and co-producer is Tracey Schulz and the staff photographer is Roger Baker; Suzy Shelor is Rag Radio associate; Alice Embree is guest host; and Glenn Smith is our political analyst. The syndicated show is broadcast (and streamed) live Fridays, 2-3 p.m. Central) on KOOP, and is later rebroadcast and streamed on WFTE-FM in Mt. Cobb and Scranton, PA., on Houston Pacifica's KPFT HD-3 90.1, by KKRN, 88.5-FM in Round Mountain, CA, and at WALHRadio.com in Wilmington, OH -- and as a featured podcast at Veterans Today. Learn more about Rag Radio here.